Everything Fresh (EFRESH) for the six months ended June 30, 2021 reported total revenues of $584.82 million, a 2% increase from the $573.21 million reported for the prior period in 2020. For the quarter, revenue totalled $389.24 million, 364% more than the $83.97 million reported for 2020’s quarter. EFRESH stated, “On June 1, 2021 the company completed the purchase of 60% of the shares of Everything Fresh Bahamas Ltd, and has consolidated the latter’s results in these quarterly financial statements. In addition, EFRESH stated, “Sales to the tourism sector began to rebound in March and April of this year followed by significant growth in May and June.” 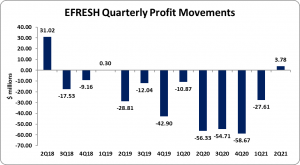