Fees and commission income for the quarter amounted to $957.01 million an increase of 33% from the $720.20 million recorded  for last year’s corresponding period. According to JMMBGL, This was due to “increased economic activity as well as significant growth in managed funds and collective investment schemes across the Group.” Foreign exchange margins from cambio trading recorded an increase of 10% year over year to close the quarter at $583.17 million (2020: $527.79 million), while net gains from securities trading showed an increase of 87% totalling $2.45 billion (2020: $1.31 billion). However, dividend income for the three months fell 9% to close at $16.62 million relative to $18.23 million in 2020’s first quarter.

As a result, operating revenue net of interest expense amounted to $6.86 billion (2020: $5.00 billion), the Company noted, “All of the major revenue line items increased, especially net interest income, trading gains and fees and commission income. This was facilitated by increased economic activity relative to the prior period as well as continued accommodative monetary policies in the countries in which we operate. Further, our clients continue to demonstrate confidence in the value of solutions and services which was evidenced by strong growth in the loan and investment portfolios.”

The Company recorded an impairment loss on financial assets of $241.64 million compared to $169.37 million for the same quarter of 2020.

Total assets as at June 30, 2021 amounted to $544.56 billion relative to $431.80 billion in 2020.  According to JMMBGL, “This was mainly on account of a larger loan and investment portfolio. Investment portfolio and loans and notes receivable grew by 9% and 6% to J$290.92 billion and J$127.13 billion, respectively. The credit quality of the loan portfolio continued to be comparable to international standards and we continue to maintain enhanced monitoring to mitigate against possible deterioration in credit quality.” 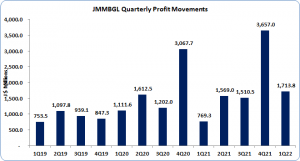