Kingston Wharves Limited (KW) for the six months ended June 30, 2021, reported revenue of $3.91 billion a 17% increase when compared to $3.35 billion recorded for the corresponding period of the prior year. Revenue for the second quarter grew 40% to $2.06 billion (2020: $1.48 billion); as both the Company’s ‘Terminal Operations’ and ‘Logistics Service’ segments reported increases.

The ‘Terminal Operations’ grew by 13% over the corresponding period of the prior year to a total of $3.05 billion relative to $2.69 billion last year. Management noted, “The results represent a rebounding of the segment, driven by a marked increase in transhipment motor vehicle moves and growth in the bulk and breakbulk business. The growth in these cargo types served to offset the slower recovery pace in other areas, primarily containers which continue to be affected by global supply chain challenges sparked by the COVID-19 pandemic.”

The company’s ‘Logistics Services’ grew 27%, to total $1.25 million, up from $980.21 million. The company highlighted that the “The strong performance of this division reflects the realization of gains from ongoing capital investments and systems improvements made to expand service offerings and improve overall efficiency. Of particular note is our project of digital transformation which allows for remote payment, cargo traceability and clearance as well as our improved warehousing facilities.”

Management noted, “Nearshoring is a growing logistics industry phenomenon; one of the paradigm shifts in the COVID-19 global economic environment where manufacturers are diversifying their supply chain sources and seeking warehousing and product finishing solutions closer to markets. Kingston Wharves is well positioned to capitalize on these developments, having made crucial investments over the last five years in construction and acquisition of warehousing facilities to build-out a fuller suite of logistics services. 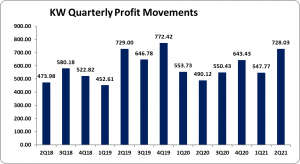