Wigton Windfarm Limited, for the three months ended June 30, 2021, reported sales of $636.63 million, a 15% decrease on the $750.89 million reported in the prior year. WIG noted that, “the change was largely due to (i) the lower level of production, and (ii) the approximate 50% rate reduction in United States dollar for Wigton Phase II which commenced this quarter.”

Other income amounted to $32.96 million, a 52% decrease when compared to $68.78 million in the same period last quarter. In addition, general administrative expenses increased for the quarter amounting to $174.70 million relative to $92.19 million documented in the same quarter in the previous year. Management noted that the increase was due to:

Higher critical major maintenance costs incurred during the quarter versus the SPLY.”

Management noted that, “Wigton anticipates a call for renewable energy in the near term given that the Ministry of Science , Energy and Technology (MSET) has indicated that the Integrated Resource Plan, which addresses electricity supply for the next twenty (20) years, targets more than 500MW of capacity to the national grid to be procured by 2025. The Company remains ready to respond with proposals to develop utility scale projects for connectivity to the national grid.” 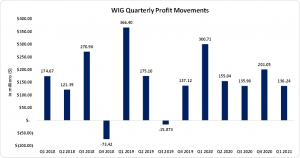