Everything Fresh (EFRESH) for the six months ended June 30, 2019 reported total revenues of $1.11 billion, a 15% increase on the $968.64 million reported for the prior period in 2018. For the quarter, revenue totalled $520.54 million, 5% more than the $494.02 million reported for 2018’s quarter. EFRESH stated, “sales of the traditional business dipped by 7% versus the prior year as one of our major Hospitality Industry relationships closed for a major refurbishing exercise and will reopen early in the fourth quarter of this financial year.”

In addition, EFRESH stated, “the Company expects to continue to grow the sales of our Meat Experts division to improve the utilization of the factory and absorb the associated overhead costs of the plant.”

Cost of Sales for the period increased 19% to $982.81 million relative to the $828.43 million booked the corresponding period in 2018. As such, gross profit for the period amounted to $130.91 million, a 7% decline on the $140.21 million reported in 2018. Gross profit for the quarter fell by 36% to total $52.87 million, compared with the $82.52 million booked in prior quarter. “This was due to changes in the overall product mix. In the second quarter of 2019 the Company entered into a wholesale relationship with a new customer for a few select items. The sales to this customer represented new business, however the margins were reduced to facilitate the venture,” Management mentioned.

Total operating expenses increased 91% for the six months ended, to total $156.27 million, $74.59 million above the $81.68 million booked for the corresponding period in 2018. Of this, administrative expenses advanced to $156.12 million (2018: $73.20 million), while selling and promotion expenses declined 98% to $151,000 (2018: $8.48 million).  “This was due mainly to an increase in human resource costs of $12.6 million which took place in the second half of 2018 and the first quarter of 2019. In addition, the increase in deprecation was due to increased capital expenditure, electricity increased due to increased refrigeration usage and exchange losses increased due to net foreign currency outflows that took place in the second quarter over a period when the Jamaican dollar weakened against the US dollar,” the Company highlighted. 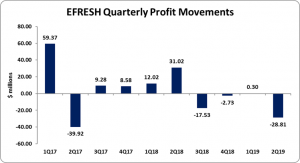