Everything Fresh (EFRESH) for the six months ended June 30, 2022 reported total revenues of $1.27 billion, a 116% increase from the $584.82 million reported for the prior period in 2021. For the quarter, revenue totalled $731.20 million, 88% more than the $389.24 million reported for 2021’s quarter. EFRESH stated, “This was mainly due to the resurgence in the tourism sector in both Jamaica and Bahamas when compared to the previous year.” 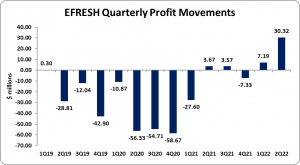