The Company reported other operating income of $732,000 for the quarter, which was 26% less than the $993,000 reported for the corresponding period last year.

EFRESH highlighted, “There are positive signs that the hotel sector is beginning to recover as the recently concluded Easter period reflected an increase in arrivals and occupancy. It is expected that by summer the majority of US citizens will be fully inoculated against the Covid-19 virus and hotel occupancy in Jamaica is expected to rise significantly in the second half of 2021.” 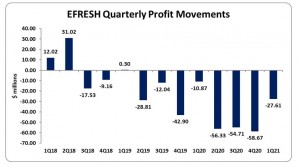