Caribbean Flavours and Fragrances (CFF), for the three months ended March 31, 2021, reported revenues of $133.74 million relative to $149.39 million for the comparable period in 2020. CFF stated that, “the Company’s performance was affected by the downturn in the local beverage market due to a shortage of sugar which is a critical raw material for beverage manufacturing and delays in receiving of substantial export orders.”

Cost of sales amounted to $89.22 million relative to $101.55 million in the prior corresponding period. Consequently, gross profit fell 7% to close at $44.52 million for the period under review, compared to the prior year’s figure of $47.84 million.

Consequently, profit from operations for the period closed at $14.04 million versus $15.89 million booked twelve months earlier.

CFF mentioned, “Covid-19 continues to restrict the full implementation of our Business Plans, which are anchored on the pillars of revenue growth, new product development and expense management as we aim to improve the year over year financial performance.” 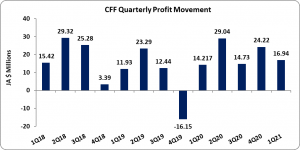