ISP’s total operating expense amounted to $68.13 million, up 4% from $65.83 million in 2020. Management noted, “the Company has maintained its cost of operations while meeting greater customer demands.” The expenses for the period are broken down as follows:

ISP highlighted, “the newly established customer sales contact center is our focus as this will result in the development of new products and markets across several delivery channels.” 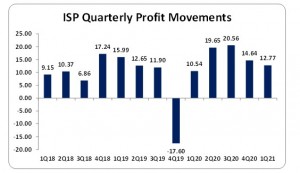