EFRESH reported a Net Loss of $27.58 million for the year relative to a loss of $181.14 million recorded for in the prior year. 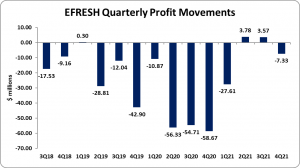