Elite Diagnostic Limited, for the six months ended December 31, 2017 booked a 24% increase in revenue to total $141.67 million compared to $114.12 million for the same period in 2016. Revenue for the second quarter rose by 26% to $71.85 million (2016: 57.24 million). The company stated that, “these increases were primarily due to the increased demand for Magnetic Resonance Imaging (MRI) and Computerized Axial Tomography (CT) scans at the New Kingston location.”

Elite mentioned, “Revenues from our Liguanea location, opened in November 2017, were $2,495,100 and rose from Ultrasound scans. Our Liguanea location is planned to house our Operating Suite as well as a high quality imaging 3T (3 tesla) MRI machine. The company received the Ministry of Health Certification for the Operating Suite in January 2018.”

Finance Cost for the six months totalled $10.44 million, a significant increase of 108% when compared to the $5.02 million recorded for the same period last year.

Consequently, Net Profit for the period totalled $11.93 million, a 15% decline compared to $14.08 million recorded the prior financial year. Net profit for the quarter amounted to $1.20 million, an 86% decline compared to $8.50 million booked for the second quarter of 2016. Net profit was greatly affected by the, “additional expenses incurred from the Liguanea branch along with costs assocated with the preparation of the IPO amounting to 12,300,000.”

As at December 31, 2017, total assets amounted to $449.92 million, up $199 million from the balance of $250.92 million as at December 31, 2016. The increase in total assets was as a result of the increase in property, plant and equipment from $178.05 million to $389.34 million. The Company noted this increase in assets is, “partially as a result of the investment in 3T MRI machine in response to the strong demand for MRI scans. The purchase of the 3T was financed through GE Capital also, the 3T MRI, the only one of its kind in Jamaica, was delayed and is now scheduled to be fully operational in the late April 2018.” 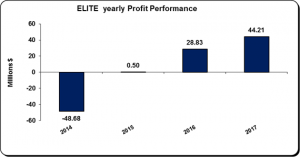