Other operating income amounted $4.20 million for the nine months, a decline of 60% compared to $10.56 million booked for the previous year’s corresponding period.

PTL finance cost for the period was $9.32 million relative to a cost of $6.40 million booked for the prior year’s corresponding period.

Consequently, pre-tax profit for the nine months totalled $66.48 million, 18% less than the $81.11 million reported in 2017. No taxes were charged for the year due to income tax holiday as a result of listing on the Junior Market of the Jamaica Stock Exchange. As such, Net Profit Attributable to Shareholders totalled $66.48 million (2017: $81.11 million). Net profit for the quarter totalled $8.87 million relative to $29.47 million booked in 2017. 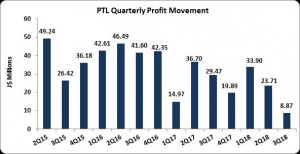