Interest expenses for the period amounted to $207.68 million, a 5% increase when compared to $197 million recorded for the prior year.

Administrative expenses rose 16% for the year to close at $189.89 million up from $163.96 million recorded in the previous year.

Eppley recorded a total of $10.82 million for share of net profit from joint venture accounted for using the equity method for the period relative to the $10.55 million recorded for the corresponding period in FY2019.

Net impairment losses of financial and contracts assets totalled $321,000 versus $1.67 million documented in the prior comparable year.

As such, pre-tax profit closed at $226.06 million for the year ended December 31, 2020, 41% more than the $160.29 million booked in 2019. Taxation of $5.13 million was booked, relative to the tax credit of $3.23 million reported a year prior.  This resulted in a net profit attributable to shareholders of $220.93 million, a 35% increase from the $163.52 million recorded for the same period in 2019. Net profit for the quarter amounted to $56.27 million, a 17% uptick when compared with the $48.17 million recorded for the last quarter in 2019. The company highlighted, “Our profits grew significantly despite a reduction in interest income. Profitability growth was driven mostly by the expansion of our asset management business. Asset management fees and the dividends we receive from our subsidiaries and affiliates are reflected in our financial statements as other operating income.”

Eppley noted, “Eppley remains well capitalized. Our proprietary portfolio is diversified, carefully underwritten and continues to perform. Our asset management business adds earnings largely insulated from credit or market risks. We expect to focus on carefully deploying our excess liquidity and continuing to grow our asset management business in 2021.” 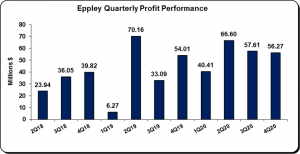