SSL Venture Capital Jamaica Limited (SSLVC), for the six months ended December 31, 2020, reported revenues of $19.32 million versus $95.30 million reported in the prior year’s corresponding period. While for the quarter, SSLVC reported $1.07 million (2019: $44.28 million) in revenue. SSLVC stated that, “The lingering effects of the COVID-19 pandemic, continue to severely impact performance especially on the bar and entertainment sectors, major revenue earners for the group, with losses before taxes coming in at $39.7M, for the quarter ending 31st December 2020 compared with $76.3M for the same period in 2019. Most of the losses recorded relate to the distribution segment, the main casualty of the pandemic.”

Other operating income closed at $115,524 (2019: $351,650) for the six months period ended December 31, 2020. In addition, administrative expenses were $35.93 million compared to the $79.70 million documented in the previous year corresponding period. SSLVC reported that, “The Group has been able to realise savings from rigorous cost management initiatives and efficiency improvements.”

Management stated, “Following a strategic review of the distribution segment and the severe impact on the business brought on by the pandemic, the Board and majority shareholder of SSLVC have decided to shutter the operations of Bar Central effective December 31, 2020. It is anticipated that the process for winding up the company will be completed as soon as possible. Shareholders will be updated as the process unfolds. It is our intention to ensure that our shareholders be made whole on their investments.” 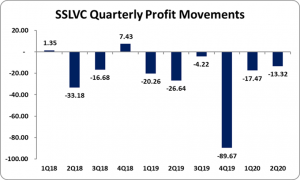