‘Share of Net Profit from Joint Venture accounted for using equity method’ amounted to $3.50 million relative to $833,000 the year prior. 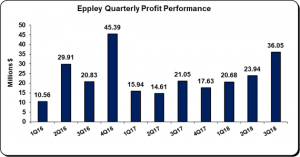