Share of net profit from joint venture accounted for using the equity method amounted to $3.45 million relative to $2.87 million the year prior.

The Company highlighted, “At the end of the quarter we owned a $3.6 billion investment portfolio consisting of loans, leases, receivables and investments in our real estate and asset management joint ventures and subsidiaries.”

In addition, Eppley further stated, “we also managed the equivalent of US$46 million of committed capital for investors at the end of the first quarter through the Caribbean Mezzanine Fund and the Eppley Caribbean Property Fund.” 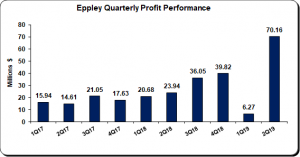