Administrative Expenses increased by $10.08 million or 6% to total $193.25 million when compared with the $183.17 million recorded for the comparable period in the prior year. Notably, other operating income for the year ended decreased 89% to total $7.55 million relative to the $67.78 million booked in the same period for 2018. Notably, the company booked non-operating income of $46.56 million relative to nil the prior year.

Total comprehensive income for the year amounted to $85.22 million compared to the $143.01 million for the corresponding period in 2018.

Consequently, Net profit attributable to shareholders for the year amounted to $87.63 million, versus the $123.84 million documented for 2018. 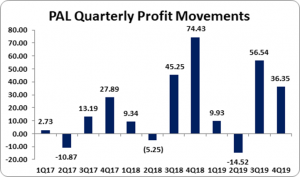