Direct expenses increased to $659.32 million, this compares to the prior year’s figure of $749.61 million, representing a decrease of 12%. Management noted, “this was mainly due to the non-recurrence of rights and technical fees associated with the 2018 FIFA World Cup project.”

Other income climbed for the period to $26.87 million compared to the 2018 figure of $22.36 million. RJR mentioned that, “the increase was mainly driven by exchange rate revaluation.”

Tax expenses surged to $11.46 million in 2019 from $4.80 million incurred in 2018, which resulted in net profit for the period closing at $24.42 million relative to a loss of $70.19 million for the prior year’s corresponding period in 2018. Net profit attributable to shareholders amounted to $21.98 million versus net loss attributable to shareholders of $70.28 million booked in the same period last year.

In addition, the Company stated that, “during the quarter, an integrated broadcasting division was implemented and a more focused approach to technology initiatives and strategic projects across the brand portfolios. The continued roll out of its High Definition workflow resulted in some benefits during the period, even as we await a policy decision from the Government on the technical standard and business model used in Digital Switch Over.”

The Company, as at June 30, 2019 recorded total assets of $3.83 billion, a marginal decrease of 0.1% when compared to $3.83 billion for the previous corresponding period. 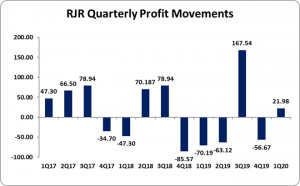