EU: Debt mainly held by non-residents in half of the EU Member States

According to one of the latest report published by Eurostat, the statistical office of the European Union, “Significant differences can be observed across the European Union (EU) regarding the sector in which government debt is held. Among Member States for which data are available, the share of public debt held by non-residents in 2017 was highest in Cyprus (82%), followed by Lithuania (73%), Latvia (68%), Finland, Austria and Slovenia (all 67%).”

The report went on to state that the largest proportion of debt held by the (resident) financial corporations sector was recorded in Sweden and Denmark (both 69%), ahead of the Netherlands, Malta and Italy (all 62%). Generally across the EU, less than 10% of debt was held by the resident non-financial sectors (non-financial corporations, households and non-profit institutions serving).

With almost 25% of total government debt having a term below one year, Sweden registered the highest proportion of short-term initial maturities of debt among the Member States in 2017, ahead of Hungary (18%) and Portugal (17%). Italy (13%), Denmark (11%), Finland and France (both 10%) also recorded shares of short-term maturity debt around or above 10%. At the opposite end of the scale, almost all of the debt was made up of long-term maturities in Bulgaria, Lithuania, Poland and Slovakia. 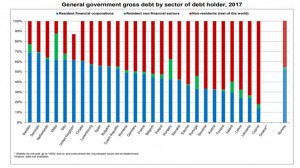