In February 2018 compared with January 2018, production in the construction sector decreased by 0.5% in the euro area (EA19) and by 0.8% in the EU28, according to a recent publication by Eurostat, the statistical office of the European Union. Activities in the construction sector is decreasing at a slower pace than in the previous month, January 2018, when production in construction fell by 0.8% in the euro area and by 1.1% in the EU28.

Comparison by construction sector and by Member State 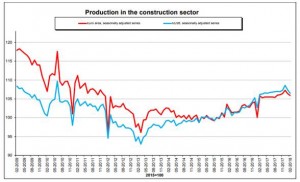