FosRich Company Limited (FOSRICH) for the three months ended March 31, 2019 booked a 39% increase in revenue to total $378.58 million compared to $271.85 million for the same period in 2018. The Company noted, “The growth in revenue has been the direct result of the strategies implemented by the Company to increase its business within the distributive space of our business for specific products such as wires and wiring devices, control devices and panels.”

Other income, for the period totalled $9.17 million a contraction of 9% when compared to the $10.10 million recorded for the prior period in 2018.

Administrative and other expenses rose by 19%, to total $114.11 million (2018: $96.23 million). “The increases was driven primarily by staff related costs attributed to both the general increase in salary as well as the decision taken by the Company of strengthening its team in key areas in anticipation of future projects and new revenue streams. The impact on its staff costs is reflected without the associated revenue, however this timing issue will be reversed in the short term. Other investments resulting in increased legal and professional fees; increased selling and marketing costs and increased insurance costs were other factors” the Company noted.

Finance costs of $21.25 million were recorded for the period, a 93% increase when compared to $10.99 million for the corresponding period in 2018. Fosrich noted, “This increase is being driven by a new bond issue, obtained to assist with the financing of new capital projects as well as the solidifying of the Company’s working capital, an important pillar which is critical to the full implementation of the Company’s Strategic Plan. This new facility was obtained at more favourable rates than the previous bank or line of credit facilities.”

Profit before taxation totalled $32.88 million, a 7% increase when compared to $30.79 million last year.

No taxes were incurred for the period, thus net profit for the three months ended March 31, 2019 totalled $32.88 million, a 7% increase compared to $30.79 million the prior period 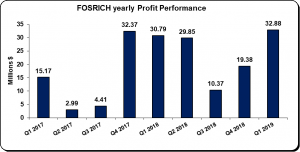