SOS highlighted that, “during the quarter, SOS delivered the first export order to the islands for the year, a 20’ container of chairs with another export project looking to be delivered in the 2nd quarter of 2019.”

Furthermore, the Company mentioned that, “SOS was also very busy supplying and installing over 700 seats to the BPO sector as well. All of these factors led to positive financial performance with all key factors showing steady growth.” 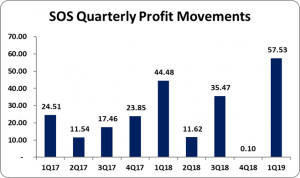