Other income, for the year totalled $41.91 million a significant increase when compared to the $12.88 million recorded for the prior financial year.

Net Profit for the year totalled $54.94 million, an 81% increase compared to $30.34 million the prior financial year. 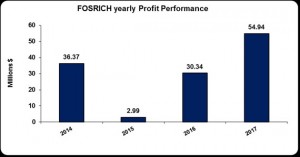