FosRich Company Limited (FOSRICH) for the three months ended March 31, 2022 booked a 64% increase in revenue to total $900.29 million compared to $549.28 million for the same quarter in 2021. The Company noted that, “These increases were attributed primarily to increased sales in eight (8) of our eleven (11) Product Groups as follows: Control Devices, Industrial, LED, Lighting World, PVC, Solar, Wires and Wiring Devices.

Other income, for the quarter totalled $19.96 million an increase of 32% year over year, when compared to the $15.12 million recorded for the previous year’s comparable quarter.

Administrative and other expenses rose by 43%, to total $195.16 million (2021: $136.64 million). “The changes was driven primarily by increased staff related costs for salary adjustments, increased sales commission due to improved sales performance and improvements in staff benefits; increased occupancy cost due to the commencement of obligations for our new Fulfilment Centre at 76 Molynes Road; increased electricity cost; increased legal and professional fees; and increased depreciation due to increases in the carrying values of property plant and equipment. There were reductions in motor vehicle expenses” as per Management.

Finance costs of $37.24 million were recorded for the period, a 17% increase when compared to $31.80 million for the corresponding period in 2021. FosRich noted, “This increase is being driven primarily by increases in bank financing.” 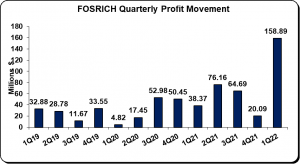