Seprod Limited (SEP) posted revenue totalling $43.88 billion compared to $37.74 billion recorded for the same period of the prior financial year, representing a 16% increase year over year. Revenue for the quarter amounted to $12.73 billion relative to the $9.08 billion reported in 2020.

Seprod reported profit from continuing operations of $2.14 billion (2020: $2.85 billion), a 25% decline year over year. Loss from discontinued operations totaled $145.83 million versus a profit of $23.03 million reported in 2020. The company noted, “This decline must be put in context as, in 2020, the Group recorded a one-off gain of J$762 million from the sale of a property. With the exception of this one-off gain, the unaudited full year profit for 2021 increased by J$47 million or 2% versus the corresponding period in 2020.”

The Company highlighted that “We had a devastating fire at Facey Merchandise’s distribution centre on October 9, 2021, that wiped-out over 86% of the finished goods inventory, which also included the Christmas stocks. This severely impacted the financial performance, as the well documented global supply chain challenges have limited the speed of replacement of the lost inventory. Our manufacturing entities have ramped up production, our principals in the distribution pillar did their best to supply, local stakeholders partnered with us to find and make functional alternative location for storage and our employees have simply been outstanding. While we lost billions of dollars of inventory and infrastructure (all adequately insured) we did not bow; indeed, we have started our recovery and we will emerge from this a more resilient, efficient, and committed organization with a strong growth trajectory.” 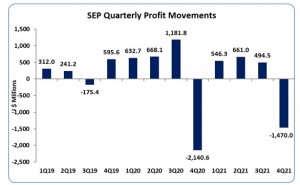