Finance cost year to date totalled $191.88 million, an increase of 34% when compared to the $142.97 million recorded for the same period last year. While for the quarter finance cost amounted to $45.78 million (2021: $37.71 million),  a 21% increase. Management stated that “Finance costs were impacted primarily by the IFRS 16 lease assessment as an additional long-term lease was added in this financial year. The finance costs associated with the bond issued in December 2021 also impacted the total finance cost.” 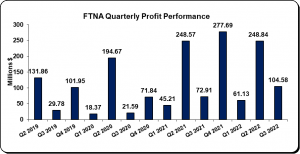