As such, gross profits for the period advanced by 14% and closed out the nine month period at $410.36 million relative to $360.13 million in the prior year’s  corresponding period. Fosrich noted that, “These increases were attributed primarily to the greater availability of the products required by the market.”

Administrative and other expenses were $314.10 million, a 2% increase on the $307.21 million posted last year. According to the company, “there were increases in staff training, legal and professional fees, rent and bank charges. Decreases were driven primarily by efficiencies gain from management of staff related costs, reduced insurance costs and reductions in damaged goods write-off and warranty expenses.”

In addition, other income year to date increased soared to $17.37 million at the end of the nine months ended September 30, 2018 compared to $4.02 million booked for the similar period in 2017. According to management, this was due to, “favourable foreign exchange gains amounting to $14 million.”

Fosrich incurred finance costs of $42.62 million, 64% more than the $26.03 million reported for the same period in 2017. The company highlighted, “This increase is being driven by a new working capital line of credit obtained to assist with the financing of operations. This new facility was obtained at more favourable rates than the previous bank facilities.”

Fosrich recorded nil year to date for taxes compared to $8.35 million paid for the same period in 2017. As such, net Profit for the nine months ended September 2018 amounted to $71.01 million versus $22.57 million documented a year earlier. Net profit for the quarter amounted to $10.37 million relative to $4.41 million reported for the third quarter of 2017.

FOSRICH noted, “the result for this, our third quarter since out listing on the Junior Market of the Stock Exchange on 19 December 2017, reflects the implementation of specific strategies ad outlined within our strategic plan. We are cognizant that despite the challenges ahead within this operating space, that we have the right talents to ensure that we remain competitive and deliver value solutions to our customers.” 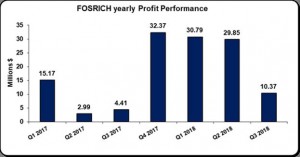