Administrative expenses climbed by 23% for the year, to total $1.23 billion versus $1 billion in 2019, while selling and promotion expenses closed the financial year at $99.28 million (2019: $78.52 million). FTNA noted that, “this was directly attributable to the opening of our new flagship location at Waterloo Square, which accounted for most of the overall increase in expenditures for the fiscal year.”

Finance cost for the period totalled $155.37 million compared to the $8.33 million recorded for the prior year, while other income amounted to $51.65 million relative to $33.65 million booked in 2019. Management noted that the increase in ‘Other Income’ was, “due primarily to growth in in-store revenues and rentals.” While, for finance costs, FTNA highlighted that, “this was driven primarily by the addition of the Waterloo Square lease expenses, adoption of IFRS 16 in July 2019, and fair value losses in our Unit Trust investment of $23.1 million.”

This resulted in profit before taxation totalling $263.89 million compared to $270.27 million recorded last year, a 2% decline year over year. 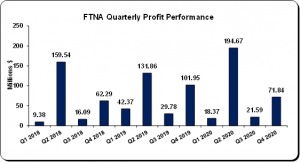