Finance Cost for the three months totalled $14.22 million, an increase of 98% when compared to the $7.19 million recorded for the same quarter in 2018, while other income amounted to $12.41 million relative to $8.52 million the prior year.

This resulted in profit before taxation totalling $18.37 million compared to $52.05 million recorded last year, a 65% decline year over year. FTNA stated, “Profit before tax, declined mainly as a result of the imminent opening of the Waterloo Square location.  Increased expenses were incurred to recruit and train the new team, for store set-up and for increased marketing and promotional activities ahead of the October opening.  Now that the new Waterloo Square store has opened, we are encouraged by the response from our customers, and we anticipate healthy growth in our revenues.”

There was no income tax for the period, however, in contrast to 2018’s tax expense of $9.68 million. Net Profit decreased by 57% to end the period at $18.37 million relative to $42.37 million recorded for the prior year’s corresponding quarter.

Management indicated, “there was great anticipation about our coming addition at Waterloo Square with its 140 parking spaces, and we are confident that we will benefit from an increased customer base and economies of scale, and that as befits the country’s largest city and business hub, our Kingston operations will drive the growth of Fontana Limited.”

As at September 31, 2019, total assets amounted to $2.93 billion, up $1.44 billion from $1.49 billion as at the previous year. The increase was mainly due to in ‘Property, plant and equipment’ and ‘Right of Use of asset’ which closed the period at $749.68 million (2018: $213.80 million) and $832.56 million (2018: nil) respectively. The Company noted “fixed assets and inventory from the new Waterloo store, as well as the impact of IFRS 16 where the value and liability associated with applicable leased properties are now recognized on the Balance sheet.” 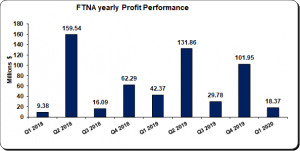