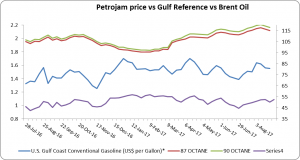 Voluntary production cuts from some Organization of the Petroleum Exporting Countries (OPEC) members since November 2016 have reduced the supply of medium and heavy quality crude oil to the world market. In addition, crude oil production outages in Canada and declines in production from Mexico and Venezuela are further reducing the total amount of medium and heavy crude oil available to refiners , although more gradually than OPEC production cuts. In contrast, the two OPEC members exempt from limiting production, Libya and Nigeria, have increased production of their light-sweet crude oil in recent months, although Nigeria’s production remains below its January 2016 level. In addition, much of the increase in U.S. production has come from shale formations in the Lower 48 states, which is primarily light crude oil.