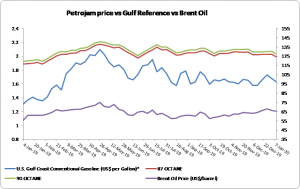 On February 03, 2020, it was noted that, “the U.S. average regular gasoline retail price declined over 5 cents from the previous week to $2.46 per gallon, 20 cents higher than the prior year. Moreover, the East Coast, Midwest, and Gulf Coast prices all decreased almost 6 cents to $2.39 per gallon, $2.31 per gallon, and $2.14 per gallon, respectively. The Rocky Mountain price also experienced a decline by nearly 3 cents to $2.53 per gallon, while the West Coast price inched down almost 2 cents to $3.16 per gallon.