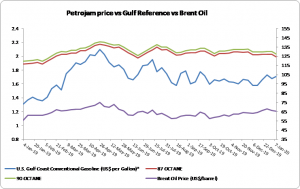 Average regular gasoline retail price fell close to 1 cent this week compared to the previous week to $2.57 per gallon. This was notably 32 cents higher than the similar period last year. Prices in the West Coast dipped nearly 1 cent to $3.20 per gallon, and the Gulf Coast price fell less than 1 cent, remaining at $2.28 per gallon.