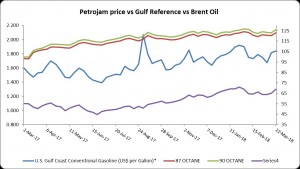 U.S. petroleum exports continues to trend up in 2017

The exports of US petroleum products have been increasing last year by 555,000 b/d, from 5.2 $million barrels per day (b/d) in 2016. Exports includes hydrocarbon gas liquids (including propane), distillate, and gasoline have been major contributors of this growth. Gross refinery inputs averaged 16.9 million b/d in last year while refinery utilization did not set a record though reaching 91% as refinery capacity has rose in recent years. The products have been supported by the strong global economic growth which has driven overall demand along with the various market conditions unique to each product.

The climb in exports of petroleum products have attributed largely to increasing U.S. total petroleum exports for the last eight years. Crude oil the largest single contributor of exports grew 527,000 b/d from the 2016 level while the greatest year-on-year increase for a single petroleum product was by distillate. The movement in US crude oil was just a slight increase relative to the total petroleum products. Propane continuous second-largest U.S. petroleum product as 905,000 b/d of propane were exported in 2017 higher than motor gasoline for the second consecutive year. US propane was sent to 58 locations in 2017 with most of the products being distributed to petrochemical feedstock demand in Asia.