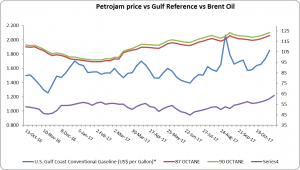 In its November Short term Energy Outlook (STEO), the U.S. Energy Information Administration (EIA) forecasts the price difference between West Texas Intermediate (WTI) crude oil priced at Cushing, Oklahoma and Brent, the global crude oil price benchmark, to remain at $6 per barrel (b) through the first quarter of 2018 before narrowing to $4/b during the second half of 2018 (Figure 1). WTI averaged $2/b lower than Brent price through the first eight months of 2017 and averaged $6/b lower than the Brent price in September and October.

The forecast Brent-WTI price spread in the November STEO is about $1/b wider than was forecast in last month’s STEO. The wider forecast spread reflects continuing price developments that have emerged over the past two months that likely resulted from transportation constraints in moving domestically produced crude oil from Cushing and from the Permian basin in Texas to the U.S. Gulf Coast. Although many other factors can affect WTI, Brent, or both crude oil prices at any given time, near-term changes in the Brent-WTI price spread will generally come from pipeline capacity expansions and increasing U.S. crude oil production moving in and out of balance. The WTI price spread with Brent reflects the transportation costs associated with bringing crude oil from Cushing to the U.S. Gulf Coast and with exporting crude oil to Asia, the marginal market in which Brent and WTI crude oils compete.

As U.S. crude oil production has increased, particularly in regions like the Permian basin, so has the need for more transportation infrastructure to accommodate it. However, the rate of production growth and the scale and timing of when additional pipeline capacity will be brought online are not always aligned. EIA estimates that, without pipeline constraints, moving crude oil from Cushing to the U.S. Gulf Coast typically costs $3.50/b, but it has gotten more expensive as transportation constraints have developed.