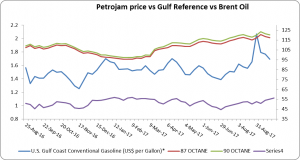 Second-quarter 2017 financial statements for 55 U.S. oil companies indicate that aggregate liquids production grew year over year for the first time since the fourth quarter of 2015. Cash flow from operating activities also increased year over year, the third consecutive quarter of year-over-year growth, reaching the highest level in nearly two years. These companies’ ability to sufficiently meet financial obligations and their increased hedging activity, which locks in prices for their future production, suggest that production could continue growing in the coming quarters.

The 55 companies included in the analysis are listed on U.S. stock exchanges and must submit financial reports to the U.S. Securities and Exchange Commission. They operate largely in U.S. onshore basins, but some also operate in the Federal Offshore Gulf of Mexico, Alaska, and various other regions across the globe.