Management noted that, “Our operational strategy for 2019 was focused on investing in our brands and expanding market share, deploying digital and innovative solutions for our customers. The Group continued to enhance its enterprise wide risk management and compliance processes and drive greater operational efficiencies within the Group. GraceKennedy Limited has positioned itself for future growth with the on-going implementation of transformational structural and process improvement initiatives.” Furthermore, “All business segments recorded increased revenue and profits for 2019 compared to 2018,” as per Management. Segment report is as followed:

Moreover, GK noted that, “in 2018 the Group had non-recurring gains of J$1.13 billion from the dissolution of a non-operating subsidiary and an acquisition by an associated company. Excluding these gains in 2018, together with the IAS 19 and IFRS 16 expenses noted above, Profit before Tax for the year 2019 would have been higher than 2018 by J$1.42 billion or 23%.” 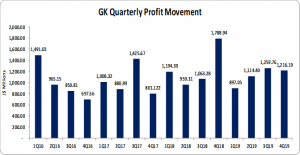