Sterling Investments Limited (SIL) for the year ended December 31, 2019 reported a 34% increase in total revenue to $148.37 million compared to $110.45 million recorded for the corresponding period in 2018. The Company noted that, “the increase reflected increased foreign exchange earnings and trading gains.” Of total revenue:

Foreign exchange gain amounted to $43.87 million compared to the gain of $23.01 million booked the prior year’s period. The Company stated that, “SIL’s portfolio benefited from the rise in global asset prices (in USD terms) which in turn led to a substantial increase in total comprehensive income from a loss of J$21.7 million in 2018 to J$211.5 million in 2019.”

The Company booked net gain on sale of debt investment securities at FVOCI increased by 67% of $4.34 million relative to 2.6 million in 2018.

The Company also booked Net gain on sale of equity investment securities at FVTPL of $1.87 million a decrease from 2.64 million in the prior comparable period.

Management noted that, “SIL recorded an unrealized gain on quoted equities of J$1.9 million. The Jamaican dollar depreciated against the US dollar by J$4.85 or 3.8% for the twelve-month period ended December 2019, relative to the same period in 2018 when it depreciated by J$2.72 or 2.2%.”

SIL booked an impairment gain on available for sale securities of $1.18 million relative to loss of $9.44 million for the corresponding period in 2018.

Unrealized fair value gain on equity investments securities at FVTPL closed at $9.65 million versus a loss of $4.14 million booked in the prior corresponding period. 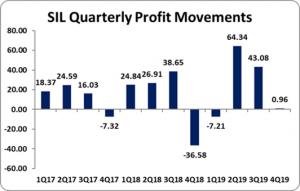