Global trade hits record highs of $7.7 trillion in the first quarter of 2022

According to UNCTAD’s Global Trade Update, which was released on July 7th, the value of global trade increased to a record $7.7 trillion in Q1 2022, an increase of almost $1 trillion from Q1 2021.

The increase in trade volumes has been far less pronounced than the gain in commodity prices, which accounts for an increase of roughly $250 million compared to Q4 2021.

Despite being anticipated to stay healthy, trade growth slowed down in Q2 2022.

The research claims that “The war in Ukraine is starting to influence international trade, largely through increases in prices.”

Additionally, it states that the rest of 2022’s trade volumes will probably be negatively impacted by both rising interest rates and the end of economic stimulus programs.

Trade trends will remain unclear due to geopolitical issues, commodity price volatility, and other considerations.

Trade growth strong for both developed and developing countries- In Q1 2022, trade growth rates persisted throughout all geographical areas, however they were somewhat lower in East Asia and the Pacific, according to the report.

Due to rising commodity prices, export growth has been generally stronger in regions that export commodities.

In Q1 2022 compared to Q1 2021, the value of merchandise exports from developing nations increased by roughly 25%. This percentage is roughly 14% for developed nations in comparison.

Substantial increases across sectors- According to the research, the value of the trade-ins made in Q1 2022 increased significantly year over year in the majority of economic sectors.

The significant increase in trade value in the energy industry is the result of high fuel costs.

Trade in the transportation industry and in communication equipment, on the other hand, has remained below the levels of 2021 and 2019, respectively.

Slower economic growth, war in Ukraine dim prospects- According to the analysis, slowing economic growth for the duration of 2022 is predicted due to rising interest rates, inflationary pressures, and worries about the sustainability of debt in many economies.

From the report it is shown that the conflict in Ukraine is harming global trade by driving up the price of energy and basic commodities on a global scale.

In the short run, increased food and energy costs are anticipated to lead to higher trade values and slightly reduced trade volumes because of the inelastic worldwide demand for these products.

Continued difficulties for global supply chains, regionalization trends, and policies promoting the shift to a greener global economy are all anticipated to have an impact on global trade this year. 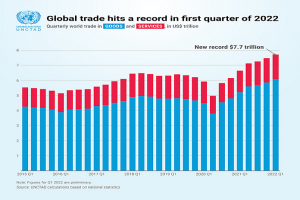