For the period of April 2020, the GOJ reported Total Revenues & Grants of $36.77 billion, $3.70 million more than the Government’s projection. Furthermore, year over year, this represents a decrease of approximately 20.3% relative to the $46.11 billion recorded for the corresponding period in 2019. Tax Revenue’ amounted to $31.92 billion, $3.70 million more than budgeted. While, ‘Non-Tax Revenue’ of $4.49 billion was reported and ‘Grants’ amounted to $349.70 million during the review period. On the other hand, no provisional amount was booked for ‘Capital Revenues’ and ‘Bauxite Levy’ for the review period.

Total Expenditure for the period April 2020 amounted to $50.05 billion. Recurrent expenditure which totalled $47.38 billion, accounted for 94.66% of overall expenditures. Notably, ‘Programmes’ and ‘Compensation of Employees’ amounted to $16.81 billion and $19.47 billion, respectively. While, ‘Wages and Salaries’ and ‘Employee Contribution’ totalled $18.34 billion and $1.12 billion, respectively.

As a result of the decrease in Expenditures for the period April 2020, the ‘Fiscal Deficit’ was $13.28 billion, relative to fiscal deficit of $6.02 billion as at April 2019. Additionally, the primary deficit balance for the period amounted to $2.19 billion. 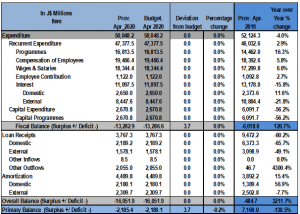