Lasco Distributors Limited (LASD) posted 8% growth in revenue to $19.50 billion, up from $18.13 billion in the corresponding period in 2019. For the quarter, revenue increased by 8% closing at $5.20 billion (2019: $4.80 billion). LASD highlighted, “ During the year, we launched our reduced sugar ICOOL beverage line in four flavours and an ICOOL flavoured water which performed quite well. We expect these innovations along with our existing products, will continue to deliver strong growth.”

Operating expenses of $3.07 billion were booked for the year end, a growth of 3% on $2.98 billion recorded for the comparable period of 2019. Of this:

LASD noted that this increase is due to, “ the impact of foreign exchange losses, restructuring expenses and legal fees associated with ongoing matters relating to the Pfizer case. We continue to invest in our route to market build out to manage our expanding business.”

LASD noted, “ The company delivered solid top-line growth, invested in capital projects for the future and commenced its restricting exercise in service of accelerating future growth throughout the 2020/21 financial year. 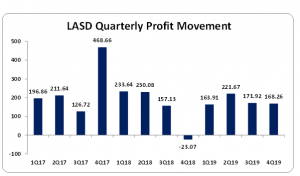