For the period of April 2017 to September 2017, the GOJ reported Total Revenues & Grants of $262.11 billion, $14.69 billion more than the government’s projection. Furthermore, year over year, this represents an increase of approximately 11.4% relative to the $235.31 billion recorded for the corresponding period in 2016. ‘Tax Revenue,’ ‘Non-Tax Revenue,’ ‘Capital Revenue’ and ‘Grants’ outperformed projections while ‘Bauxite Levy’ underperformed projections during the review period. ‘Tax Revenues’ amounted to $237.63 billion, $13.31 billion more than budgeted, ‘Non-Tax Revenue’ of $21.03 billion was reported; $483.70 million more than budgeted. ‘Grants’ totaled $2.67 billion, $567.70 million or 27% more than budgeted. In addition, “Bauxite Levy” closed at $127.5 million, relative to the budgeted figure of $131.0 million, while ‘Capital Revenues’ outperformed projections by $338.60 million to total $652.7 million.

As a result of the decrease in expenditures for the period April to October 2017, the ‘Fiscal Deficit’ was $17.78 billion, relative to a projected deficit of $36.80 billion. Additionally, the primary balance for the period amounted to $65.47 billion, 34.5% more than budgeted. 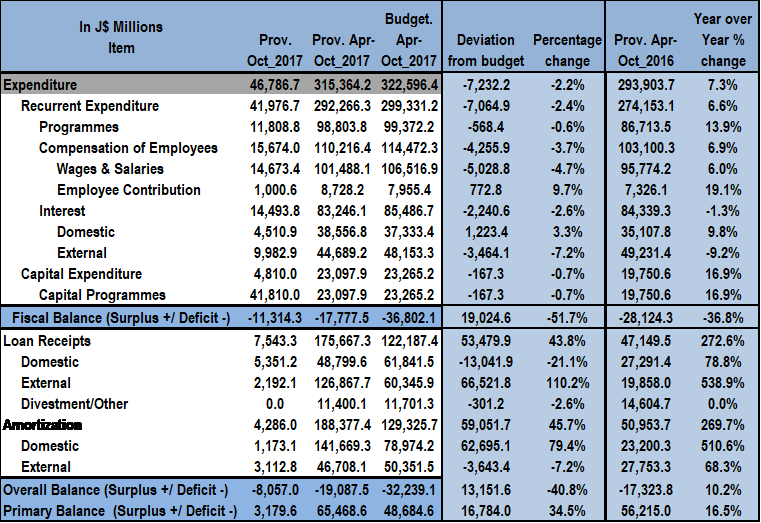 As part of the Memorandum of Economic and Financial Policies (MEFP), the GOJ estimates that the primary balance, as a performance criterion, should amount to $131.9 billion by the end of the 2017/2018 fiscal year.  For the December quarter, a primary balance of $61.0 billion is estimated. As at October 2017, this amounted to $65.47 billion.  Tax Revenue was expected to total an estimated $330.0 billion by the end of the December quarter, as at October 2017, tax revenue was booked at $271.86 billion.