Cost of sales fell 11% to total $18.46 million relative to the $20.72 million reported for the same period last year. GWEST highlighted that “the increase in cost of sales for the quarter is as a result of the timing differences in the accrual medical expenses, which we expect to level out in the coming quarter.” As such gross profits increased by 38% to a total of $50.45 million in 2019 relative to the $36.49 million for the corresponding period in 2018. Gross profit for the quarter amounted to $23.04 million (2018: $22.88 million).

Administrative expenses closed the period at $68.33 million versus $95.57 million in the previous corresponding period, while other operating expenses declined to $406,000 (2018: $1.61 million). The Company noted that the reduction was due to , “ a targeted strategy implemented early in the financial year to restructure our organization and to rationalize our human resources. This being done on an ongoing basis with an aim to achieve further reduction in our operating expenses.”

In addition, other gains were reported at $174,000 compared to losses of $477,000 in 2018. Finance cost increased for the period by $6.77 million to total $24.12 million (2018: $17.35 million). GWEST highlighted that this was due to, “ an adoption of IFRS 16 effective for periods beginning on or after January 1, 2019. IFRS 16 replaces the lease standard IAS 17, which previously recognized operating leases in rent/ lease expenses. Adoption of IFRS 16 resulted in an increase in our assets through recognizing our long-term leases as assets, and increased our financial liabilities resulting in an increase in our finance charges.”

The company added, “our outlook for the coming quarter remain positive especially in the area of real estate rentals, as our prime location has resulted in greater visitor traffic throughout our medical facilities. This has resulted in increased enquiries about rental space and we expect to see a material growth in the occupancy level in the upcoming periods.” 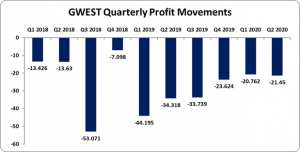