Management noted, “Of total revenues, our business to consumer (B2C) market is our strongest, showing a 50% increase when compared to the previous quarter ended June 30, 2019.”

Management noted, “Our B2C segment is showing solid growth. We experienced a 93% increase in enrolment when compared to the corresponding quarter in 2018 and a 23% increase when compared to the previous quarter ending June 30, 2019. We continue to enjoy an 80%+ satisfactory rating among our creatives (students). We are also pleased to see our Montego Bay location growing, moving from 4% of the total student population in Q2 2019 (Apr – Jun), to 21% this quarter. The interest in our courses in our Western Jamaica Campus is encouraging and we continue to play our part in building the skill-sets in the cadre of creatives in Western Jamaica.” 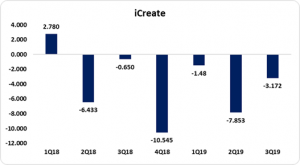