Operating profit for the quarter closed at $4.20 million in contrast to a profit of $5.09 million for the corresponding quarter of 2020.

Taxation for the current and previous three months amounted to nil thus resulting in net profit after taxation of $1.91 million relative to a profit of $1.25 million for the three months ended March 31, 2020. Management noted, “This has been attributed to a companywide cost reduction effort which included closing down our Montego Bay office and reducing operating expenses in Kingston, Jamaica. We are pleased with the efforts and based on this; we were able to deliver net profit margins of 22.72% for the quarter.”

iCreate noted, “Our main focus since the beginning of the pandemic is to ensure survival. We are pleased with the fact that we have been able to manage expenses, continue to deliver quality training in a critical moment for the Caribbean workforce and keep the business running.” 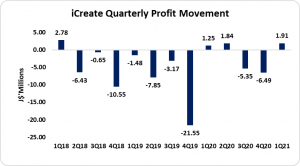