Consequently, Jetcon booked profit before taxation in the amount of $11.55 million relative to $10.31 million in 2020 representing a 12% decrease year-on-year for the period.

There were no tax charges for the period, resulting in a first quarter net profit of $11.55 million compared to $10.31 million for the corresponding quarter of 2020. 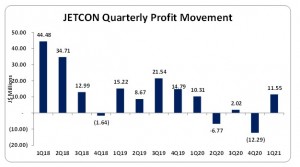