Management noted that, “the start of one of our major partnerships was delayed and we had to depend on our business-to-consumer (B2C) market to record revenue during this period. During this period, iCreate was able to restart classes while adhering to social distancing protocols in addition to expanding our virtual classes. We continue to build out our corporate partnerships with companies such as Heart Trust/NTA.”

Finance cost for the nine months amounted to $2.62 million relative to $1.08 million a year ago.

Consequently, net loss for the nine months period amounted to $2.26 million versus a loss of $12.51 million in 2019. For the third quarter, net loss totalled $5.35 million compared to $3.17 million booked in the corresponding quarter last year.

ICREATE mentioned that, “the company benefited from a revaluation surplus of $7.1m from our license agreement with Code Fellows to acquire the license to deliver coding and data security courses in Jamaica.” 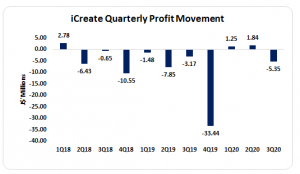