Operating profit for the quarter closed at $11.19 million in contrast to a profit of $4.20 million for the corresponding quarter of 2021.

No taxation was posted for the current period, thus resulting in net profit after taxation of $10.11 million relative to a profit of $1.91 million for the three months ended March 31, 2021.

iCreate noted, “Revenue growth is attributable to the various initiatives announced by the company at its recent Annual General Meeting around the plan to deliver our 2-to-1 financial strategy which is to deliver US$2 million in revenues and US$ 1 million in profits. Our core business, the Institute/Education division to consumer to business to business with a focus on gaining more corporate clients and partnerships. The company currently now has three major long term corporate training partnerships.”

Additionally, iCreate noted, “We have cleared all our principal tax payments, up to date with our loan obligations and have significantly cleared off our at risk payables. The investments from both Kintyre Holdings Limited and Dequity have contributed to a strengthened Balance Sheet, in addition to enabling us to invest in the leadership team needed to take us to the level of desired growth and profitability.” 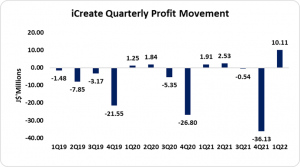