iCreate Limited (ICREATE) for the year ended December 31, 2021 reported revenues of $32.83 million, 44% down from the $58.38 million reported a year ago. For the fourth quarter, ICREATE posted $1 million in revenue (2020: $11.25 million). Management noted, “During the year, the Company received capital injection of $50.5 million and $18.3 million respectively. These are convertible loans, which are repayable in full, by way of cash or conversion to ordinary shares, subject to the approval of shareholders and regulatory bodies. The Company has not to date been able to realize its projected revenues.”

Finance cost for the year amounted to $9.89 million relative to $15.42 million a year prior.

Consequently, net loss for the year amounted to $32.26 million versus a loss of $29.06 million in 2020. For the fourth quarter, net loss totalled $36.13 million compared to $26.80 million booked in the corresponding quarter last year.

Management stated that “Based on the plans and strategies being pursued and implemented, the directors and management believe that the Company will generate adequate cash flows and profitability which would allow it to continue in operational existence for the foreseeable future. On this basis, the directors have maintained the going concern assumption in the preparation of these financial statements. This basis of preparation presumes that the Company will be able to realize its assets and discharge its liabilities in the ordinary course of business.” 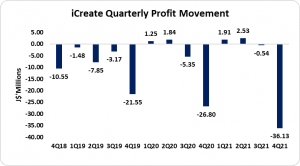