The company noted, “while there seems to be no ending in sight as it relates to the current pandemic, iCreate continues to push its virtual classes and maintain social distancing protocols for physical classes. We continue to build out our corporate partnerships with companies such as Heart Trust/NTA. The company has also diversified into production, which saw the introduction of Reggae Sunsplash in a virtual form in Q4. This contributed significantly to the revenues made and break-even from a profit and loss perspective. The festival was extremely successful, bringing in viewership from over 20 countries with over 300,000 viewers. We are thankful for sponsors such as Visa and Jamaica Tourist Board who ensured the success of the festival.”

Administrative expenses declined 27% to $37.79 million (2019: $51.90 million). Depreciation and amortization expense increased year over year to close at $3.90 million versus $3.18 million recorded for the corresponding period in 2019.

Total comprehensive loss closed the twelve months period at $2.50 million versus a loss of $45.95 million booked at the end of 2019.

iCreate stated, “During a pandemic year, we were able to stabilize the company with a combination of diversification of revenues, introduction of new digital marketing courses, securing new partnerships and a company wide reduction of losses. We have moved from losses of $45.9 million to a loss of $2.5 million for the year ending December 31, 2020. We are pleased with this result and look forward to further implementation of the strategies going into 2021.” 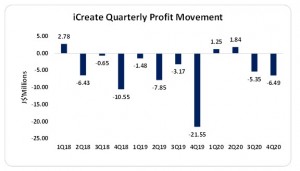