Operating expenses, for the three months ended March 31, 2022, increased to $52.42 million relative to $44.13 million in the prior year. Owing to the increases in expenses, IronRock experienced an underwriting loss for the quarter of $22.76 million versus a loss of $10.93 million in 2021. 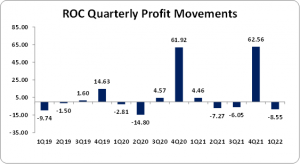